A few days ago, went along to the second round of consultation for the new ‘Together For a Dementia Friendly Wales’ strategy, where I find myself in yet another arts centre ‘networking’ about dementia. But it turned out to be a thoroughly interesting meeting for several different reasons relevant to my research at the moment. This second part was to build on the first round, and was jointly run by DEEP and The Alzheimers’ Society, which in itself is significant to me because I think both organisations come from quite different perspectives, something which later on during the day struck me as having some symbolic resonance (for want of a better expression) in that particular venue. 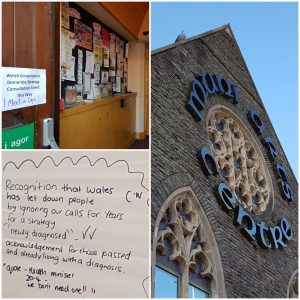 Having already helped to craft the departmental response to this document, it has to be said that it singularly uninspiring in its tired public health approach, and without being unduly critical, there was a consensus among colleagues about not only how poorly written it seemed, but there were enormous holes in terms of looking at residential care, or more fundamentally, what the kind of philosophical or societal leaps are  needed to underpin such a ‘vision’ – beyond the rather tired framing of health ‘risk’ for the population. Everyone welcomes the person centred approach, but by now,  fundamentally moving towards a more rights-based position for people affected by dementia, one where their voices are heard and respected, should be the new norm, and in fact (form several readings, not just my own) is surely the basis of the Social Care and Wellbeing Act. Yet there was scant mention of this.

But this detail is not for here. A couple of weeks later, reviewing my notes I saw that this was possibly one of the most significant public meetings I’ve been to so far in terms of my PhD, and not only because of the overall framing of such events (‘consultations’)  that are by now such an established technology of government, arguably also a key component for manufacturing consent or even conducting conduct. All these more theoretical considerations are important, but of equal significance as I look back on my notes are some of the other more symbolic, contextual  and even historic resonances which came up.

There are three main points, not entirely unrelated. Firstly, the presence of many people who are actually affected by dementia personally or as carers, or as people who had lost someone close having care for them, made a massive difference on the day. If there was one things sorely lacking in the consultation document, it seemed to be that they hadn’t really been taking notice of how other nations, similarly placed, have done this kind of thing. Scotland, after all, is on it’s third such strategy.

That said of course, here we were in the consultation, but my impressions form the day were of the overwhelming indignation felt by many in the room, because of a lack of strategy; some had lost loved ones and one of the principal demands made was for the Welsh Government to apologise for this perceived indifference that people had felt over the years. Basically, when parts of the strategy were actually discussed, it was taken apart. In addition, from my jottings, I noted that there were some fundamental contradictions in terms of the  subjectivities expected by ‘government’, clearly on display here: there were the true stories of people who were affected by the condition and who had been encouraged to come along to such events (partake in ‘active citizenship ‘ – the very thing the system is now demanding of us all), but who were also facing a cut to their PIP (…from another part of government). A field-day for Foucauldians everywhere, here we have government simultaneously trying to shape the conduct of the citizenry in a late-liberal way, while also casting its punitive gaze; truly a twisted take on responsibilization, ( ‘we want you to be active, but now you’re too active, and we’re going to take your money away….’). But beyond this consideration, this is surely one of the glaring injustices which will have to be addressed; we know that Welsh Government is (seemingly) powerless when faced by the rotten logic or heartlessness of the swivel-eyed ideologues still making hay out of the financial crisis, determined to cut the state. The very heart of the DFC agenda, I’m afraid, is utterly intertwined with austerity logic. Of interest here though is the fact that these dementia activists – that’s what they are – are beginning to make common cause, loudly, with others who are being slashed and burnt, in the name of citizen sacrifice.

My second take home, not entirely unrelated, came from trying to notice things about the space we were in. It really seems that much of ‘governance’ is carried out in such spaces these days i.e. arts centres, but this particular building had a host of other resonances which couldn’t be ignored. A Wesleyan methodist chapel, albeit of the enormous, late Victorian gothic variety, it had been through various historical cycles over the last century, including being the municipal hall before becoming an arts centre – and in this last incarnation, it had been under threat recently because of – you’ve guessed it – austerity cuts to local government, only to be reborn as a social enterprise (of course). But there’s an intriguing passage from one of Foucault’s essays, The Birth of Social Medicine, which kind of brings everything together:

….in the second half of the nineteenth century….English medical control …provoked violent popular reactions and resistances, small scale anti-medical insurrections…I think it would be interesting to analyse how this medicine, organised in a form of control of a needy population, incurred such reactions…..For example, it is curious to observe that the dissident religious groups, so numerous in the English-speaking Protestant countries, has the primary goal in the seventeenth and eighteenth centuries of opposing state religion and interference by the state in religious affairs, whereas those groups which reappeared in the course of the nineteenth century were concerned with combating medicalization, with asserting the right to life, the right to get sick, to care for oneself and to die in the manner one wished. This desire to escape form the compulsory medicalization was one of the characteristics of one of these numerous apparently religious groups that were intensely active at the end of the nineteenth century, as they still are today.

In some other writings, Foucault also singles out the Wesleyans as one of these groups. So here we were, in 2017, in a building with roots in a Christian grouping which may have been active in anti-medicalization battles, ostensibly taking apart a document which had, for the most part, too much ‘health’ and ‘risk’ in it, and not enough about rights. One of the activists there actually said to me at the end of the day, as we were introduced: ‘you mark my words, it’s time for dementia to come out of psychiatry and into society….they won’t know what’s hit them over the next few years‘.

Extending he metaphor further, I’d place the vocal and effective members of the DEEP group present (DEEP having Quaker roots – derived from JRF….) and the more centralized, corporate feel to the Alzheimer’s Society, for example, in no way a judgment on the effective way that both organisations ran the day’s proceedings. But there are fundamental differences in approach between the two I think.

The final point relates to the unsaid and perhaps unrecorded rituals of the day, if not the rituals of the myriad types of citizenship which seem to be part of this field. Going back to the mechanics of consultations as technologies of government, I noted also, given the setting, the rituals of presenting the text (not the Bible, but the strategy), the confessional (as we heard the stories and accounts of people’s lives), and also the laughing and crying of the consultees (congregation). At the end of the day, I think we all felt a sense of catharsis, but it’s surprising to me how close to the kinds of rituals that would have been enacted here, to an extent, all those years ago, everything felt; there’s a vast literature on this from Weber onwards, including Foucault, on this – but as part of the fieldwork for the PhD, it was a powerful moment of recognition, which has given me a lot to think and write about beyond this blog post.